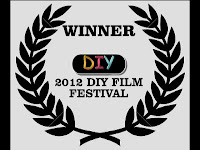 The DIY Film Festival honors the best of independent and self-produced films. Past winners have been able to get their films on Showtime and some have found a theatrical release. Submissions are accepted from countries around the world, culminating in our annual awards in Hollywood at the Roosevelt Hotel, home of the first Academy Awards.

Submissions to the 2013 DIY Film Festival must have been released after Jan. 1, 2011 and have been produced without multinational corporate backing.
Categories include:

Entries will be judged using the following criteria:

1) The sophistication and potential of the film to reach a larger audience; and

2) The unique use of DIY production tools to tell a compelling (dramatic or comedic) story that perhaps breaks boundaries of traditional story telling.

Information on the event and entry forms can be found at www.DIYConvention.com, www.diyfilmfest.com or submitted through Withoutabox.com

The films should follow the paradigm of "Do It Yourself" filmmaking. This means no film studio or major corporation financed your film. We're a film festival that highlights and focuses on the ability to tell a good story, a moving story, an interesting story using the tools that are available to everyone. That being said, it's up to you how professional your film looks, or your story is.

We firmly believe in artist Jean Cocteau's maxim "When the cost of making films is as much as a pencil and piece of paper, then we'll find true art."
Posted by Curated Content at 12:34 AM No comments:


You don't really know who's going to respond to your work and in what fashion.  So if you can afford to, get it out there, see if you can get into these premiere film fests.  Toronto is a wonderful venue for international attention, Sundance is the premiere festival in the US (along with Slamdance, South by Southwest, Santa Barbara, Palm Springs short, NY Film Fest, Indie Spirit Awars etc), and Cannes of course, is Cannes.  Look at your film with the jaded eyes of a festival programmer - and then find the right fit for your story.

And then after you've been the festival route and due to myopia of festival programmers, still don't have a place for your film, think about self distribution.  It's the way of the future for filmmaking - and as filmmakers get frustrated trying to get films into the studio pipeline, or the indie pipeline, or any pipeline other than a pipeline to the ocean - they'll see how DIY distribution can make you the filmmaker happy, make your audience happy, and make a name for yourself, as well as at least a modicum of income.

Here's one way to do it, it's not for everyone, but if you're tired of waiting for Godot to show up and anoint your film worthy of studio attention, here's one way to do it.  We at the DIY Film Fest have seen a number of folks pursue this avenue, and while it's no guarantee of profitability for your film, it does grant a certain amount of satisfaction in a world where there's little of it in artistic pursuits.

Finish your film in the best way that you can, screen it for friends so that you can experience what they experience when viewing it. "Kill all your darlings" meaning edit the film until its not just good but really good.  And you feel it can't be edited any longer.  Add some great music, there are many bands that will let you use their music on your film in return for credit or future compensation ("if the film is sold to a distributor, you will be paid as per BMI or ASCAP rules) or look for some great classical music that is inexpensive to license.  Music can make or break your film.  You've already paid attention to the visuals, to the sound and dialog, make sure the music moves your audience as well.

Then figure out where you want to show your film.  If its itunes, you need an aggregator.  They cost money, unless you find one like Ted Hope's new KinoNation, which if they take on your film, don't charge to sell it through to the various VOD sites.  You can save thousands using their service - otherwise you need to hire one of those listed in the link to get onto Itunes.

There's also Amazon, which is one of the most visited sites per day in the world.  The way to get your film onto Amazon is to use their createspace.com service - they have templates and easy instructions on how to send a DVD of your finished film, as well as help you to build your artwork.  You can do all of it for free if you want to. The only caveat is that if you purchase an ISBN yourself, if you resell the film to another entity, you continue to use your own title, if you use their ISBN then you have to rename the film for an alternate sale. Once they have the DVD they stream it live - all funds go monthly into your account.

Yes, there's a problem if someone uploads your film to Torrent.  But if you've made a good film, and give people the option on your website to pay for it - even a paypal donut that says "if you've seen my film and not paid for it, please donate something."  But see pic to the left as to what happens to those who don't.

But that aside, you set the price, and then Amazon takes their cut.  It's around 55% to your 45% - but considerably better than a studio percentage.  Once you have the film packaged and online, then the next most important way to reach your audience is marketing and publicity.  Can you do that yourself?  Sure, if you have the time and inclination and imagination.  Many folks hire a publicist, or hire a marketing consultant - it's something you can find online.  There's also the PayPal way to go - once you have a paypal account, you can purchase a Merchant Services option which allows you to build their code onto your website.

You do have a website for your film,don't you?  If not, build one for free - get a gmail account, then use their very simple blogger software - build your site, then add HTML or links to purchase your film on your site - either via amazon, itunes, or paypal - where you can design in the paypal merchant button a link that takes your audience to another site to download your film.  You're only limited by your imagination.

Remember not to sign away any of the rights to your film without really understanding what the contract says.  There are some people who agree to represent your film, then take a huge percentage of your profit, and you'll never see a dime.  They've resold your film to another aggregator, and getting money from that sale is next to impossible.  If you can sell it yourself, then you're ahead of the game. (Can anyone say attorney?)

The most recent success story in that regard is Louis CK's wildly successful one man show.  He did a show at the Beacon in NY, paid for it himself (around $200K) and then put the film out on his website for $5.  The web protocol he used was the Amazon Cloud - with payments going direct to his PayPal account - so that once it resides in the cloud, he gets charged a nominal fee for every download.  In 30 days, he'd made a million dollars with his film - the first month alone!


Of course he's got a built in audience, he's got fans, he's got a good show that everyone wants to see - but he made it simple for them to find it, he did it himself.  At the moment, it's the DIY story of the year.  And why would filmmakers waste their time with theaters when they know full well that a theater is not going to show their off beat, particular film?  Why not bypass all that and just offer it directly to the audience?

So that's it for now from the DIY Film Fest.  We believe in Cocteau's observation that "when the cost of filmmaking is as much as a pencil and a piece of paper, then we'll find true art."  That time is now.