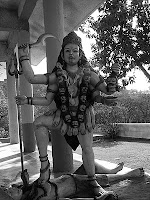 This statue to the left depicts how I felt the past couple of days, while I waited for someone in management to manage our site.

By the way, this photo was taken in Juhu, one of the soundstage complexes for Bollywood films outside of Mumbai.  Not far from it was a hand painted sign depicting a black jaguar and the warning "Don't wander off the set, as people have died here."  So - if you're ever lucky enough to make a Bollywood film, these are the kinds of things you need to consider.

Meanwhile, we're back to celebrating the DIY filmmaker and the DIY film.  We've got entries from all around the world.  Documentary Filmmaker MIREL BRAN from Romania, won last year's winner for Securitate Hunter 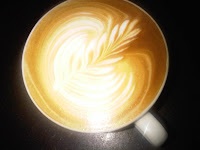 has submitted two new documentary films.  We've got entrants from as far away as New Zealand, Australia and South Africa.

We like to feature and promote filmmakers who create their own DIY experience - and we believe that everyone who has a story to tell and a camera, should be encouraged to pick it up and show and tell.

Here's a photo of a cappuccino made by a barrista in Santa Monica the other day.  Looks like a golden laurel.  An appropriate award for someone who puts all the effort into one small cappuccino - and yet, it's a work of art.  You can find art anywhere if you only look for it.  And the more we can encourage people to look for art in their own lives, a better place the planet will be.
Posted by Curated Content at 1:22 PM No comments:

Hi All, I'm in contact with the management at Withoutabox.com - which is a feat unto itself!  Now that they're owned by IMDB which is owned by Amazon, it really is the one stop shop for the DIY filmmakers. 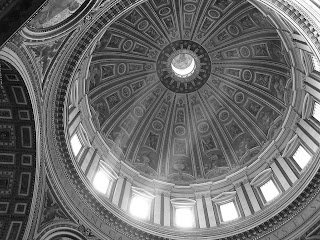 Just a note about DIY Distribution - if you're not aware of createspace.com - it's something to check into.  You follow their fairly simple instructions and submit a DVD of your film which they digitize and can offer as streaming video.  Of course it's up to you to advertise, promote, sell and otherwise wave the flag of your film high.  But while you're waiting to sell it to a larger studio concern, your friends and family can purchase the DVD and have it on their tv in a day or two. 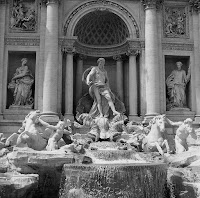 Create space is www.createspace.com - We contacted them here at the DIY Film Festival to see if they wanted to be listed as an Ad on our website - but they're not up and running in that area at the moment, still trying to manage content.  But I can recommend their business model - it makes sense.  Just make sure you own all the rights to the music, to the content, to the visuals etc from your film - and have all the permissions necessary before listing it.  A fairly simple process - it's a way for DIY filmmakers to make money from their film while its in the festival circuit - and at a screening you can stand up and announce "Go to my web page if you want a copy!" and provide a link to your product.

Make sense?  To sign up with Amazon.com to supply content, go to their Advantage Account.  But if you sign up with CreateSpace.com and provide the content, they'll provide the package, and instantly offer the film as a streaming video - for whatever price you decide.  Don't forget to thank us at Oscar time.

Long live the DIY Film movement!!!!  (why the shots of Rome? Perche no?)
Posted by Curated Content at 5:21 PM No comments:

Without a Box Entries!

A glitch has appeared in the WithoutABox entry system... for some reason, they're listing as as "CLOSED FOR THE SEASON" - Apologies - we aren't closed for the Season - in fact we're trying to catalog the entries that have come in over the past two weeks, and as soon as we can RATTLE THEIR CAGE we shall have them listed. This happened last year as well, a temporary glitch - we hope.  Hopefully in a day or two back to normal.  So please, be patient, will post an update as soon as we're LIVE AGAIN!!!!  Best,  DIY Film Fest Team
Posted by Curated Content at 4:27 PM No comments:

DATE:
LOCATION:
Telluride
Each Labor Day Weekend, the tiny town of Telluride, Colorado, triples in numbers. Swells of passionate film enthusiasts flood the town for four days of total cinematic immersion, embarking on a viewing odyssey, blissfully spending entire days in flickering dark rooms. With only an appreciation of celluloid to guide them, these devotees flock to the show, year after year. Why? Blind faith. The Telluride Film Festival doesn't reveal the program until everyone lands in town, yet attendees trust that a unique experience will unfold. The top-secret program features premieres, classics, seminars and discussions with the world's leading filmmakers and stars.
Posted by Curated Content at 1:22 PM No comments:

Mike Collett-WhiteReuters
VENICE, Italy (Reuters) - The Venice film festival has largely lived up to its billing so far, providing a steady stream of A-list actors on the red carpet and a lineup of movies which has pleased most critics.

They are among 22 movies announced so far, soon to be joined by a 23rd "surprise" film unveiled Tuesday, vying for top prize, which is announced Saturday.

Although festival juries are notoriously difficult to second guess, an informal poll of critics published by trade magazine Variety puts Carnage marginally in the lead, but ratings have been generally strong.

Booing at the end of press screenings is common at film festivals, but there has been little this year, suggesting a happy ending to festival director Marco Mueller's term in charge.

Carnage is Polanski's adaptation of stage play "God of Carnage," and stars Kate Winslet, Jodie Foster, Christoph Waltz and John C. Reilly in a critique of bourgeois values set in real time in a single location.

Polanski would not be able to collect his prize should he win, facing extradition to the United States where he is still wanted for sentencing for a crime committed in 1977, but victory would be generally popular.

"Just how Swedish director Tomas Alfredson got under the skin of British behavior so intuitively is remarkable."

NO SHAME IN "SHAME"

Clooney got the 11-day cinema showcase off to a strong, starry start with opening film The Ides of March, a thriller set in the world of American politics in which he, Ryan Gosling and Philip Seymour Hoffman appear.

And Steve McQueen, a British artist-turned-director, got what many consider the performance of the festival so far from Irish actor Michael Fassbender as a sex-obsessed New York professional in "Shame."

"Fassbender...might already have the Coppa Volpi (for best actor) in his pocket," wrote La Stampa daily.

Oldman also won praise for his nuanced portrayal of Smiley, and among female leads, Aggeliki Papoulia in Greek tragedy "Alps" and Keira Knightley in David Cronenberg's "A Dangerous Method" impressed.

Alps and Italian entry "Terraferma," tackling the hot topic of immigration, had plenty of admirers, but "That Summer," starring Monica Bellucci, was poorly received.

Outside the main competition, Madonna presented "W.E.," her stylish re-telling of the story of American divorcee Wallis Simpson and her relationship with King Edward VIII.

Andrea Riseborough was singled out for her role as Wallis, but overall the movie got a lukewarm critical reception.

Steven Soderbergh brought with him a stellar cast in "Contagion," a slick examination of the spread of a deadly disease and the global panic it causes.

Matt Damon, Gwyneth Paltrow and Laurence Fishburne all hit the red carpet, as did Hollywood veteran Al Pacino who was honored with a lifetime achievement award.

At 71, the "Godfather" actor drew big and noisy crowds on Sunday, as he presented his documentary "Wilde Salome."