Along with our pals over at Flying Saucers, the DIY Film Fest is proud to announce it's second annual summer screening.  Last year's was at Umami Burgers, where savory burgers were mixed with dramatic shorts.  This year's event will be All Sci Fi All The Time.  We're focusing on entries that have either a science fiction backdrop, or have some kind of weird "what the heck is that?" factor. 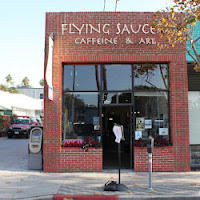 Then we'll mozy next door to VIDIOTS VIDEO where there's a state of the art digital project and celebrate some of the great entrants to the festival.  Then for those who are still up to the task,we'll retire to Flying Saucers to talk, snack and drink to the filmmakers, or just talk about aliens among us, in general.

If you're from another planet, and are currently occupying a human form and shape - this screening is definitely for you!  Some snacks and beverages will be provided at the event later - so if you're capable of eating human food, there will be some provided. (And for those of you humans among us, yes, you too will enjoy the films!)

Our line up so far:

DIY 2010 FILM FESTIVAL WINNER: AVABOT.
An amazing piece of animation shot in the basement of this amazing filmmaker from Michigan Jamie Surgerner.  A chess playing robot behaves in what can only be described as a sentient manner.

DIY 2011 FILM FESTIVAL GRAND PRIZE WINNER: ALL THAT REMAINS
Cody Blue Snider is a force to be reckoned with.  This amazing film features the specter of death, who has arrived to take one of the main characters in the film.  We hope the specter avoids our screening, but this is one powerful film that should not be missed.

DIY 2011 FILM FESTIVAL WINNER COCKPIT: RULE OF ENGAGEMENT. Ronny Cox stars in this piece by Jesse Griffith, who will BE ON HAND to discuss his many film festival winning opus.

DIY 2012 FILM FESTIVAL RUNNER UP: 999.999.999 BY GERALD GRUNOW.  This amazing animated short comes to us from Germany, and features a story line that takes place in the not too distant future.  At least it appears to take place there,and we wanted to include it in the evening!


More to come, time permitting, still sifting through our many entries to see what other films might apply.  We'll let you know, but so far, this is the lineup!

C'mon down for some Alien Adventure!
Posted by Curated Content at 12:04 PM No comments: