The 10th annual DIY Film Festival is proud to announce the winners of the "Best Film" and "Best Director" categories.  The Festival has become truly and international festival, and this year's winners prove that. Actor/Writer/Director Flavio Parenti's "Quantum Butterfly" is the winner of BEST FILM.  Rodolfo Novaes has been named BEST DIRECTOR for his film "Just In Time."

Flavio Parenti is an award winning actor and filmmaker.  His film Quantum Butterfly (Sogno Farfalle Quantiche) is a brilliant blending of live action footage with animation and text.  The film follows a group of young Italians during the best summer of our hero's life.  He falls in love, he breaks the heart of his girlfriend, and is devastated when she leaves him.  His friends try to console him - and the visions and images in his head are like a journey through James Joyce's "Portrait of the Artist as a Young Man" using modern technology.  Parenti's clever technique, score, dialog and stunning visuals make this a truly unique DIY experience.  No one who watches his film can come away without feeling completely immersed in the topic, and amazed by the technique involved.  At the moment, Parenti is filming in Rome, appearing in Woody Allen's latest film (currently titled "Nero Fiddled" with Alec Baldwin, Ellen Page and Woody Allen)  We at the DIY Film Fest hope Flavio continues his passion of writing, directing and producing as well, as this film is a testament to his ability to tell a compelling story with the tools anyone can use. A tour de force of DIY filmmaking.

Rodolfo Novaes is a writer director from Brazil studying film at the University of Westminster in the UK.  This stunning debut film, shot with the Red camera, is a clever journey of a husband who returns home to London to find his wife has been cheating on him while he was away.  He follows his wife's lover to find the man is a hired gigolo - and the gigolo doesn't realize the husband is following him.  Their ensuing encounter is both surprising and brilliant, and shows a promising career for this amazing film student.  This is his first film.

WINNER BEST ANIMATED FILM
Ike Ahloe’s “CLOCKED IN”
An amusing look at the adventures of a clock puncher in a computer office.

HONORABLE MENTION
Gerald Grunow’s “999.999.999”
Set in the future, brilliant animation from a German filmmaker about the power of a rose.

HONORABLE MENTION
Ryan Klaver’s short documentary “AMEND”
From Taylor University, a straight forward story about a one of our nation's "Greatest Generation."

WINNER BEST SHORT COMEDY FILM
Nicholas Plagman’s “THE HAM SANDWICH THAT CHANGED THE WORLD”
Provocateur and comedian Nicholas Plagman's true story of how satire made it into Fox News.

HONORABLE MENTION
Derek Frey’s “BALLAD OF SANDEEP”
The comedic journey of an outsourced Indian, who turns the tables on his bosses.

WINNER BEST DOCUMENTARY SHORT
Jessica Vecchione’s “ROBERT   -   PORTRAIT OF AN ART-ER”
Amazing look into an artist who creates monuments out of stone, and lives in an alternate universe of time.


HONORABLE MENTION
Craig Macnaughton’s  “COME HERE GO WAY” (Canada)
Beautifully lensed examination of a love affair between someone who can and one who can't commit.


WINNER JURY PRIZE - EXPERIMENTAL FEATURE
Brian Paul Higgins “CURE FOR THE CRASH”
Masterful blending of documentary and fiction in a tale of modern day Hobos who ride the rails in a world fraught with danger and dreams.


WINNER BEST DOCUMENTARY FEATURE
Jennifer Hitchcock’s  “Dreams Deferred: The Struggle for Peace and Justice in Israel and Palestine”
Insightful journey into the "settlements" of Palestine from the point of view of Jewish citizens who are outraged or poetic about their country's taking other people's ancestral lands.

HONORABLE MENTION
Leo Grillo’s “THE RESCUER”
Over 20 years in the making, this tale is about a man who found his life's calling in rescuing abandoned pets.

HONORABLE MENTION
Gary Null’s “DEATH BY MEDICINE”
A clarion call to understand the money and collusion behind Big Pharma, and the medicines that are killing those they're supposed to save.

HONORABLE MENTION
Kevin Malone’s “CHRISTY MATHEWSON DAY”
A small town, a local hero - and how this little town continues to celebrate its most famous son.

WINNER BEST DRAMA FEATURE
Robin North, Kelly Preeper's “DEAD SAINTS”
Two women in an insane asylum.  One sees the dark world for what it is, the other sees it as a religious journey.

HONORABLE MENTION
Rachael Yaeger’s “NO LOST CAUSE”
A woman comes to terms with her car accident that left her in a wheelchair - its ultimately the faith and love of her friends and Church that get her to see the blessings in her life.

BEST WORLD CINEMA FEATURE
DOCUMENTARY FEATURE - Mirel Bran’s “ONE-WAY ROUND TRIP” (Romania)
An amazing journey with a family of Roma (Gypsies) who are expelled from France, then return to try to find a way to stay.  Everyone does their best to turn them out of the country, until they find their way to Cannes.


HONORABLE MENTION
DOCUMENTARY SHORT - Mia Mullarkey’s “HALLS WITHOUT WALLS” (Ireland)
A young Irish painter and poet struggles with his Asperger's with the help of his loved ones.

An impoverished woman is about to evicted from her home by two Israeli soldiers, while she waits for her son who is also in the military to come home and rescue her.


HONORABLE MENTION
DRAMA SHORT- Artemis Preeshl’s “PANCHA RATNA - FIVE GEMS” (India)
A DIY Bollywood film, shot in the countryside of India by a group of young Indian filmmakers who show how it only requires a passion for story telling to tell a compelling story - no matter where it is set.

Congratulations to all the finalists and winners.  The Gala is scheduled for March 3rd at the HOLLYWOOD ROOSEVELT HOTEL in beautiful downtown Hollywood. 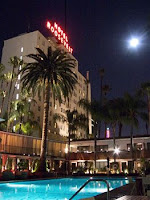 The Gala is a combined evening with the Los Angeles Book Festival and the DIY Book Festival.  It's a cocktail party attended by a number of movers and shakers in the film and book industry.  We're going to screen about an hour worth of trailers and short films from this year's festival. Admittance is with a ticket only, ticket information can be obtained by sending an email to diyconvention@aol.com. Its an intimate event where filmmakers and writers get the chance to mingle and meet people in the film and publishing industries.

Congratulations to the filmmakers for their talent and hard work!!!
Posted by Curated Content at 9:48 AM 1 comment:

The DIY Film Fest is proud to announce this year's finalist's for the 10th annual DIY Film Festival.  Thank you all for your submissions, we had films from across the planet this year, and we're glad to be able to include links to almost all of them below, so people can see this amazing crop of films for themselves.

The Gala is scheduled for March 3rd here in LA, the results (Best Film in each category) will be announced then, but meanwhile, here's the full list of Finalists for this year's festival.  Everyone will be getting either an Honorable Mention or a Best Film award. We will be showing clips, trailers and some shorts during the Gala, and we'll be in touch to make sure we have the most up to date trailers.

Jennifer Hitchock’s  “Dreams Deferred: The Struggle for Peace and Justice in Israel and Palestine”

Congratulations to the filmmakers for their talent and hard work!!!
Posted by Curated Content at 12:16 PM No comments:

Along with our sister events, the DIY Book Festival and the Los Angeles Book Festival, we're announcing our gala of celebrating the best in DIY Filmmaking will be held in Los Angeles on March 3rd.

We're sending out individual notifications to filmmakers to let them know that they're finalists for the best picture in their category, and we look forward to seeing all of you at the event if you can make it.

And congrats to all you filmmakers for finishing your film - it's not easy to finish a movie, and there's many film festivals out there - so we appreciate your thinking of us.


Details about the Gala to follow!  (Time, place, etc).

With Ridley Scott no less.  Grand prize is $$$ to make a film. http://www.youtube.com/user/yourfilmfestival

"This is Your Film Festival. You have until March 31st to submit a short, story-driven video. There's no entry fee. It can be any format - short film, web-series episode, TV pilot - and any genre. In June, audiences around the world will vote, sending 10 deserving storytellers to open the 2012 Venice Film Festival where a Grand Prize Winner will be be rewarded with a $500,000 grant to create a new work, produced by Ridley Scott and his world class team."


I recommend you guys all check into this!
Posted by Curated Content at 9:15 AM No comments: