Sage advice from a DIY Filmmaker

DIY FILMMAKING ESSENTIALS and other observations 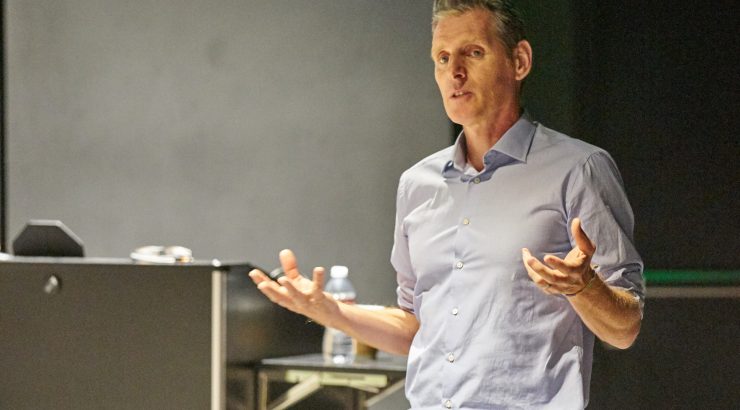 Peter Baxter cares about filmmakers, and with a do it yourself spirit he and his colleagues at Slamdance developed a workshop for students interested in careers as independent filmmakers. With 25 years of experience programming film festivals, Baxter, Slamdance’s co-founder, and president, offered his wisdom to the students of Dodge College this spring.
Consider these tips when preparing for your thesis film or as you work on your next indie project:
(*Slamdance is one community. There are many film festivals out there (like the DIY Film Fest) that focus on do it yourself work.  However, I think he means, find a community of "like minded artists" that can help you create your art, as well as you can contribute to theirs.  Film schools are one way to do this, he's speaking at Chapman, others include LMU, USC, AFI, UCLA, NYU, COLUMBIA in NY and Chicago, etc).  But that doesn't mean you have to attend - it's just that the local university is a resource and the students do look at craigslist ads for crew. THE DIY FILM FEST)
("Don't ask for permission" doesn't apply to film permits.  If you shoot out on the street without getting a permit majorly bad things can (and do happen). What Baxter means here is "don't wait for a studio, actor or agent to give you permission."  Go and make your film, plan ahead, be smart, protect your crew and actors while you're at it. (THE DIY FILM FEST)
(He's speaking to film students who, by definition, are paying a ton of money to hear him speak in a film class. (Keeping it 100% here). But the point is well taken - preparation is the thing that can save you the most time, money and headaches.  Whether you're in school or at work staring at the clock. Take the time to imagine all the problems that might go wrong, and always have a backup plan. THE DIY FILM FEST)
(Good advice. We here at the DIY Film Fest recommend thinking of "who is your audience?"  It used to be one could wander the aisles of Blockbuster and find "all the genres" of filmmaking. ("Horror," "Thriller" "Suspense," "Comedy" etc.)  But even that paradigm has disappeared.  Always good to show your film to a number of people - friends and strangers and get feedback and then... listen to it.  If it's not working for them, it won't work for other strangers.  But if it is working for them, you're audience can and will find you. THE DIY FILM FEST)
(Sounds silly, but is true. FEED THE CREW and they will feed you.  Make sure you have plenty of water and snacks or healthy food - and they will go out of their way to help you.  Try to follow the rules under SAG (time to eat, meals every 6 hours, no more than 8-10 hours of production and make sure everyone has 12 hours of sleep to restore and come back.  If you kill your crew (hopefully neither literally or figuratively) not many folks will work long hours for little play. THE DIY FILM FEST)
(Also - get permission.  Get your actors or anyone who is going to appear on camera to sign a waiver so that you can use the footage. If you don't do that you'll have headaches later if you try to sell it to a third party - they won't purchase your work without proper permits.  You can find a standard waiver online - but have them sign it. Very important.  Copyright - as soon as you put it into a form - film or script, there's an implied copyright contract, but once you're done with the film, take the time to copyright it at copyright.gov. THE DIY FILM FEST)
(We at the DIY FILM FEST have gone to an online model - because many of our filmmakers are from other countries.  It's not fair for them to travel all the way to LA when we can promote and talk about their work and who they are online.  But he's right - if you can afford to go to Slamdance, Sundance, Toronto, Cannes, Venice - and your film gets in, you'd be crazy not to go. THE DIY FILM FEST)
(We once heard a director say "If you're going to be a director, direct. Don't think about the medium. Think about the practice.  It's true as well - but don't be afraid of however you want to express yourself.  Just make sure you run it by an audience to see how people react.  There's no excuse for sloppy or bad lighting or sound or editing - but if it helps tell the story - or the story is so compelling people aren't focused on the delivery, then by all means. THE DIY FILM FEST)
(This brings to mind other maxims - if you plan on having a career, and you want to begin by making a short film,work in the genre that you think people will hire you in.  If you're a funny person, then perhaps that's your best genre. If you're a person who loves horror or thrillers, focus on those kinds of stories. And if you have a short film in that vein, try to have a script (feature length) that will be your next work.  So if someone really likes your short or feature, and they say "Do you have anything we can look at?" ... you do. *THE SIDE COMMENTS ARE FROM THE DIY FILM FEST.)

(THANKS to our friends at Chapman University, LA for posting this.)

WE AT THE DIY FILM FESTIVAL WOULD ADD:

1. Build an online presence. If people can look for your film and your name on line, it should be your design that they find.  Take the time to build a website to highlight your work.

2. Focus on story telling. Every story has three acts - beginning, middle and an end.  You don't have the follow the "save the cat" formula,or even Aristotle's "Poetics" - but both are key to understanding story telling.  "Conflict is the essence of drama" has been true since Aristotle first said it.  (And even then, he may have borrowed it.)

4. Content is more important than delivery.  Even if something is not perfectly lit, there's not perfect sound, or its slightly out of focus - if you are telling a story that is full of passion, then the passion translates.  Some people can't get past mistakes - but if your heart is in it, they will.  Find the story that moves you to tears, that moves you to laughter, that makes the hair on the back of your neck stand up ... and tell that story.  (THE DIY FILM FEST)
Posted by Curated Content at 2:31 PM No comments: