Wadlow, who won the first short film award at the inaugural DIY Film Festival, will see his film “Never Back Down” hit theatres nationwide.

“Today is one of the days I've been working my whole life towards,” said Wadlow. “I've got to be honest, there were times, like when I was a PA on “Law and Order” and my only job was keeping the homeless people from eating off the snack table, that I doubted a day like today would ever come. But it's here -- at last!”

The film stars two-time Academy Award nominees Djimon Hounsou, who has appeared in “Blood Diamond,” “Amistad” and “Gladiator.” The initial reviews have been positive, with the Hollywood Reporter noting, “Never Back Down” is “energetic and warm-hearted enough to become a word-of-mouth hit.” 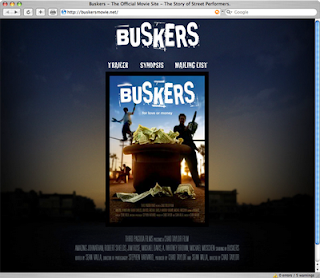 Last year's DIY Film Festival winner, "Buskers - For Love Or Money" has put a trailer on line, as well as a list of festivals its currently screening at. Check it out here: "Buskers"
Posted by Curated Content at 2:42 PM No comments: