Congrats to the Oscar nominees!

Congrats to all your hard working filmmakers that have climbed the ladder of fame.

We at the DIY Film Festival wanted to give a shout out to Benh Zeitlin, the director of "Beasts of the Southern Wild." 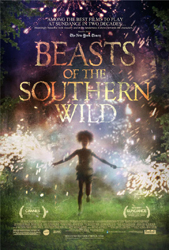 Also to point your attention to these two interviews, conducted at Sundance just after his screening of his film (which was finished two days prior).  Some notable points are made - that the film was shot in 16mm, that it was shot by him and his friends who work as a collective in New Orleans, that it was populated by a cast of locals, that there was no CGI, no special effects, or at least nothing out of the ordinary, except, of course, figuring out how to make wart hogs look like giants.

Here's part one of the interview done by Anne Thompson: of IndieWire:

And here is part two.

For all intents and purposes, this was a completely DIY Film project.  Using creativity, local actors, local resources, (as well as putting the project through the Sundance development process where Benh was able to benefit from discussing all of his choices, as well as then being able to come back to the festival with a project that they had helped along), by going through that process, Benh's film has elbowed its way into the big budget pictures playing field - his nomination shoved aside Ben Affleck and Kathtryn Bigelow, who until the nominees were announced, were shoe-ins for Oscar nominations  Except for the fact that this New Yorker decided to move New Orleans and decided to make a post apocalyptic film about part of Louisiana that is being swalled up by climate change with his collective of creative DIY minded friends.  Congratulations!!!

Write what you know, film what moves you.  Good things can come to you.

Our motto for the day here at the DIY Film Fest.
Posted by Curated Content at 12:18 PM